Today in our Holy Week Sermonette, we turn to John 12. Where Jesus says something that we idiots turn into one of the stupidest things I have ever heard. Let’s open our hymnals:

Mary took about a pint of pure nard, an expensive perfume; she poured it on Jesus’ feet and wiped his feet with her hair. And the house was filled with the fragrance of the perfume.

But one of his disciples, Judas Iscariot, who was later to betray him, objected, “Why wasn’t this perfume sold and the money given to the poor? It was worth a year’s wages.”

“Leave her alone,” Jesus replied. “It was intended that she should save this perfume for the day of my burial. You will always have the poor among you, but you will not always have me.” John 12:3-8 (edited)

First, I want to recognize that even though the gospel of John says that Judas doesn’t care about the poor only money, I will also say this. Judas was the treasurer of the group. He was responsible for feeding and clothing all these followers. He was the one who had to make sure they had enough.

I’m going to speculate something. I don’t know that Judas was the devil we make him out to be. Here we have a story of Judas concerned about finances, the next thing that happens is he betrays Jesus for 30 pieces of silver. Maybe, MAYBE he wouldn’t have had to do that… MAYBE they really needed the money. I mean how was he supposed to know?

You can feed your people if you just tell me his location… That’s it.

Anyway, Jesus responds by saying, you will always have the poor, but you will only have me for a little while. Someone (Mary) is giving Jesus a gift. A very, VERY generous gift. And he lets her. There’s a lesson in that for all of us.

However, we are dumb and stupid, and we twist Jesus words into saying “there’s nothing we can do about the poor! Jesus said there will always be poor people, it’s just the way it is.”

Not only do we make sure there will always be poor,  but we demonize them for being poor.(BTW for scripture buffs, here’s where I want John’s gospel to do commentary for us. “He said this to fulfill the empire’s policies on making sure the rich get richer and the poor get poorer”)

A few years back I lived in the capital of New York when Occupy Wall Street happened. It was exciting, it was amazing, it was finally a conversation about the corrupt system, and banks getting bailouts while their CEO’s got billions in bonuses. It was justice and conversation from ENRON. AND… it was also an opportunity to bash those seeking an honest wage for all people.

I’ve been lucky enough to have a full time job most of my adult life, but both my husband and my current partner have been or are unemployed for long stretches of time. Don’t you think they want a job you idiot? Why do you think they are protesting?

You will always have the poor is Jesus telling Judas that we must spend time with the ones we love while we have the time, before they’re gone. It is NOT a celebration or glorification that we should always have poor, that we should keep some people down, rejoicing in their misfortune because we built the system and got lucky enough to not be one of them.

There will always be poor among us, as long as we let there be.

I have a 4 letter word for you. Those of you who know me will not be surprised, I say a lot of 4 letter words. This one, however is different, it feels shameful, one I cannot speak in private or in public.

Last night I sat in a meeting where we evaluated a 2016 budget. Well, 3 budgets actually. And when all is said and done, those 3 budgets will add up to over a million dollars. I read a story during the opening devotion of that meeting that talked about the way we grew up talking about money. Some grew up with small family owned businesses or farms where they very much “knew the value of a dollar.” Others, like me, grew up in homes that never discussed money.

I was privileged in my childhood, I grew up in a middle class family where we had more than we needed, but we also lived above our means. If you didn’t have the money for it, that’s okay, that’s what credit was for. There was an, “I’ll deal with it later” attitude.

When you live like this, I have learned as I continued this pattern for a while as an adult, you have “everything you want” but are constantly under the weight of debt, and that, friends, is a heavy burden.

I have spent very little of my adult life where I did not owe someone something. Some of this is “good debt” like student loans, mortgage, car loans, etc. these are not the things that weigh me down as much, they have good interest rates and were “investments” (although NOT what they used to be.) Other debt is “bad debt”, like credit card debt.

Credit card debt didn’t become a became a problem for me after my first child was born. I worked full time out of the manse of the church and my husband was in law school, then the financial decline of 2008 and he graduated and no job. By the time we moved to Maryland in 2012 my daughter was 4 and I the amount of credit card debt I had accumulated was equal to the childcare costs for my children over the last 4 years. I didn’t think this was bad, I made $30,000 a year and was the sole income provider for 3 of those 4 years. It felt manageable.

At that time my husband and I had been married for 9 years, we had 2 kids, gotten 2 master’s degrees during that time and the only way we lived outside of our means was equal to what we had paid nannies and preschools.

The rabbit hole that is credit card debt is deep and great. I was taught how to move money around to get the best interest rates and “tried” to pay off the debt. Then, divorce.

Now, divorce is devastating emotionally and physically. But here is my public service announcement: Divorce screws you financially in every possible way.

First, I lose half my household income. My ex and I make roughly the same amount right now, he is a lawyer who has been practicing for under 5 years and I am a minister with 12 years experience, and share our kids 50/50. All of which is good, no one pays alimony or child support until our income changes (which his mostly likely will significantly and mine incrementally over the years). We took our respective debts (cars, student loans, mortgage) and split the joint debt in half. All of this is great in theory, but…

Banks are the devil, we all knew this right?

It all makes sense and all, BUT I was married for 12 years, most of the credit card debt was in my name alone, and some of the larger debts (car, personal loan, etc.) was in our name jointly. I had the better credit and for half of our marriage was a sole income provider, so it makes sense that the majority of the debt would be in my name.

Banks could care less. You think Chase cared what my divorce decree says when I tell them, “yeah, my ex-husband is responsible for that debt, so really, when you run my debt to income ratio, that’s not right…” no. And they also cut my credit in half due to the fact that my household income is less.

It’s stressful. It’s heartbreaking. It’s exhausting. It plays into the “never enough” fear and I have no idea what to do next. This is not an unusual story, especially for people my age and in my position. This does not make it better…

(Update: I don’t ACTUALLY need 6 million dollars, but you get the idea…) 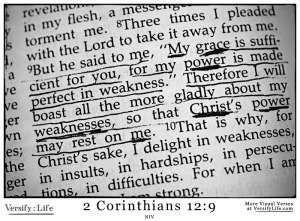 Yesterday I was working on the bulletin, as I do on Monday mornings, and of course, I decided life wasn’t hard enough so I was going to change the scripture, liturgy, and hymns I had previously picked.  Because of course. As I searched for a better text for my theme I read this verse from 2 Corinthians.

But God said to me, “My grace is sufficient for you, for my power is made perfect in weakness.” Therefore I will boast all the more gladly about my weaknesses, so that Christ’s power may rest on me. -2 Corinthians 12:9

I stared at this text for a while, contemplated using it, and then got really angry. I mean ridiculously angry.  I texted with some friends about what this could mean. I mean, I know what it means, “I must decrease so Christ can increase” it means that those of us in positions of power should get out of the way for God, for God alone has true power. It means a loss of ego, of self, of worldly pride and power. It means being knocked on our asses the way Paul was.

But yesterday, it felt like God was kicking me while I was down. Forcing me to stay down. Like me lying on the floor in the fetal position, arms protecting my face, begging for it to stop.

It’s been a hard few weeks.  I am adjusting to a custody schedule where I only see my children 7 of every 14 days. We are “nesting” until my husband’s apartment is ready and I am tired of living out of a suitcase. I am working with a lawyer to write a separation agreement, dividing debt, making budgets in which I adjust to a new way of life and a new financial reality.

Money wise I’ve been here before. For many years of our marriage we were on one income. 5 years one of us was in graduate school, there were at least 2 years thanks to the economic recession that my husband was out of a job and I made less than $30,000 a year. I made it work, we had more than enough, we provided for our children, I will do it again, I am just tired and don’t want to.

Which is where the kicking feeling came into play.

I like my God as a good God, one that does not kick me when I’m down. One that lays on the bathroom floor with me while I cry uncontrollably, one that weeps with me and loves me through the pain and darkness.

I appreciate that God can give me a swift kick in the ass every once in a while or a smack upside the head, that’s fine, that correcting. But does God kick me when I’m down? Has God done this before and I blamed myself or others?

Maybe it’s a little of both, maybe I’m missing the whole point. But it’s a thought worth exploring.